Back To The Start - Gypsy's Adventures Part 7 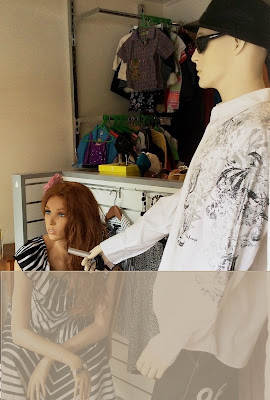 It wasn’t a good scene in the front window of Da Loop – not only did Gypsy have a gun pointed at her head and floodwater up to her armpits, but her outfit had changed since the last photo!  (Well, people always want to buy what’s on the mannequin or, in this case, mannequins…)

Now looking stunning in 80s black and white, Gypsy recalled her assailant’s recently-completed phone call.  “I’VE GOT THE REDHEAD” he’d barked into the phone.  “IF THOSE BLUEPRINTS AREN’T DOWN AT DA LOOP IN FIVE MINUTES, SHE’S HISTORY!” Gypsy couldn’t work out if he meant that he’d shoot her or she’d drown, so she asked him.
He looked at her blankly.  “Drown, obviously.  Otherwise it won’t look like an accident, will it?”
“I guess not.” 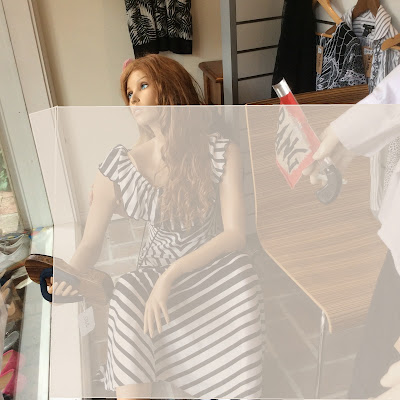 Gypsy stalled for time while her eyes darted around looking for something… anything… that could help her.  She was in it, literally, up to her neck, but it was somewhat comforting to know that he didn’t really want to shoot her.  “Ah… so was that Traeger, er, I mean Andrew, you were talking to? “
“The one and only,” he snarled.
“Well, you know we’ve split up.  I’ve never seen your blueprints, and he’s not going to come running here to rescue me and bring them to you, so why don’t you just let me go and we can save you from totally ruining your Billabong shirt?”
The man let out a loud laugh.  “I don’t care about the shirt – I bought it cheap, AT YOUR SHOP HA HA HA!”.
“SPIDER!!!” Gypsy suddenly shouted while sending a deliberate glance to the ceiling.  Billabong Man (who was arachnophobic, fortunately)  lost concentration for a fraction of a second as he followed her eyes, and so in one swift move Gypsy grabbed a wooden clog that was floating past (reduced to $14) and dived under the water.  A bullet exploded into the ceiling, then Billabong Man corrected the angle of the gun and aimed into the swirling, muddy water. But he could see nothing.
Underwater, Gypsy clonked the clog hard into the window.  Immediately, water starting pouring through a sizeable hole onto the verandah. 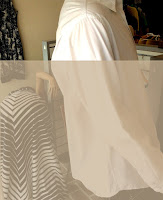 Gypsy knew she had to move fast or she would become visible to her attacker.  She turned and swam around the back of the gondola while Billabong man spun around and began to search the shop as the water receded. 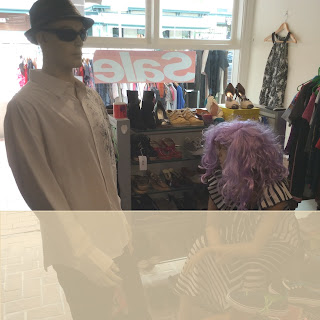 He skimmed the front of the shop for a sign of red hair, but saw none.  Where the bloody hell is she??  he thought, panicked.  She must have swum down to the back room… 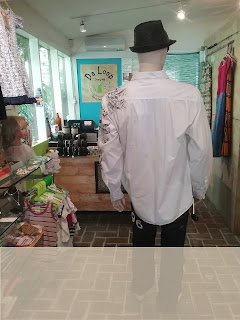 He waded off past the shop counter and Gypsy grabbed her chance – the water had receded enough such that she could yank open the door under the reduced pressure.

She ran into the street, ditching her disguise and scanning the street for Billabong Man’s accomplices who must surely be hiding in wait for Traeger.  Will he really come to save me?  she wondered.   In any case, he doesn’t need to put himself in danger now that I’ve escaped - but I’ve got to warn him!! She made a beeline for the pub, hoping to use its phone, and screaming for help on the way. (Gypsy’s phone had drowned in the cute $4 black handbag she’d been wearing.) 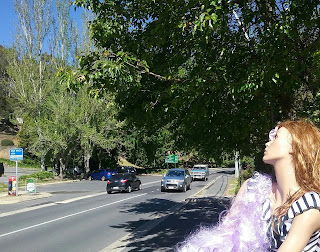 But how do you call someone when you can’t remember phone numbers because they only exist as contacts in your phone??  Will Gypsy be able to drum up enough help in the next three minutes to intercept the attackers and save Traeger and the mysterious blueprints?? 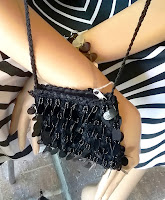