Back To The Start - Gypsy's Adventures Part 9


Da Loop is taking you back to where it all began.  Over the coming weeks we'll publish all of Gypsy's original adventures before breaking into new territory. 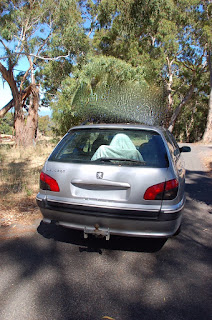 '000’ Gypsy dialled into her boyfriend Dave’s phone as she lurched from side to side with each bend of Strathalbyn Road.  Speeding in front of her was a grey wagon, and as she waited for someone to answer her call she saw a white figure moving in the back window.

“He’s conscious!” she exclaimed, but no sooner had she said it than the wagon began to edge further and further away.
“Looks like they’ve under-drugged him”, said Dave, looking very lovable in his How To Host A Murder costume combined with well-worn Pacman cap.  “Maybe that means they weren’t planning on travelling too...”
“Police, please!” Gypsy’s voice interrupted. “I’d like to report a kidnapping… Traeger Jackson… T..R..A..E…er, yes, er, no… what? No, we’re behind them, currently approaching Echunga.  Hang on, can’t you despatch someone??”  Seconds later she hung up.
“What did they say?” asked Dave.
“Well, they were confused”, Gypsy replied.
“That’s because Traeger isn’t really Traeger!” Dave pointed out.
“No, it wasn’t that – he was in the system as Traeger.  But they said he has a red alert next to his name, or something.  Not helpful!” 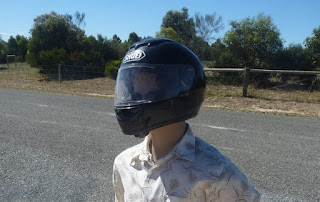 At this point the wagon had disappeared from sight and they reached the Meadows turnoff with no clue as to the direction it had taken.  They sat uselessly at the intersection, with precious seconds passing.  Suddenly there was a loud noise to the right and a motorcycle pulled up alongside Dave’s window. 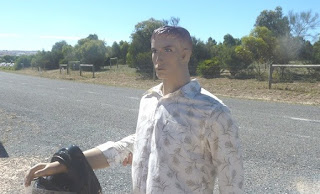 The rider removed his helmet and Gypsy gasped.  “TRAEGER!!  How did you..??”

“I’m not Traeger”, he said.
“Well, ANDREW then!” Gypsy said sarcastically, having just discovered hours earlier that her ex-boyfriend was not who she thought he was.
“I’m not Andrew either.  Look, there isn’t much time.  I can find Traeger, OK?  He’s chipped and I can get his location.”
“He’s chipped??  Hey, who ARE you?!!” Gypsy demanded.
“My name is Ron.  I’m Andrew’s…Traeger’s… twin brother.”
“Ah, of course” Gypsy nodded knowingly.  “There’s always a twin in these things.  I suppose you’re evil as well, are you?”
Ron looked at her quizzically and adjusted the collar of his Billabong feather-patterned shirt, and she decided he mustn’t have watched many soapies.
“Nevermind”, she said.  “What do we do now?”
“Follow me. I might need some backup.”
He sped off.  Dave looked at Gypsy.  “So you want me to continue with this pursuit of your deceitful and chipped exboyfriend ?” he asked. 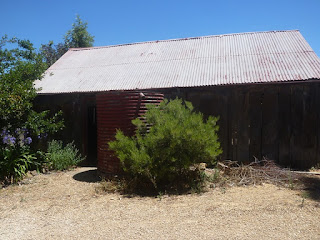 “Um, yes?” said Gypsy.  So Dave kicked the little red car into gear and followed.  Twenty minutes later they pulled into an obscured track in an unmade road reserve lined with dense Cup Gums.
“On foot from here”, said Ron as he disembarked and looked disapprovingly at Gypsy’s heels.  “We’re at least fifteen minutes behind them though, so we’d better run!”
Gypsy and Dave followed Ron across the paddocks to a deserted barn.

Around the back was a door.  Ron opened it slowly and they peered in… 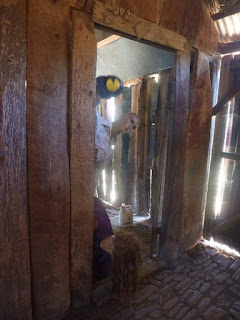 Gypsy gasped (again).  Ron swore quietly. “They’ve got him rigged up to a stretching rack.  It’s a form of torture, with a remote”, he whispered.   They must really want those blueprints!  I just hope we’re not too late!"

Has Traeger already had his arms ripped off under his (quite fetching) black checquered shirt?  (Hopefully not, or he’ll have to be velcroed every day like his counterpart, Sam, and it’s a pain in the arse.)  Or did the crew arrive in the nick of time?  Find out next chapter! 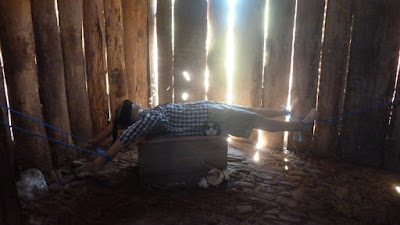