Back to the start - Gypsy's Adventures Part 3

Da Loop is taking you back to where it all began!
Over the coming weeks we'll publish all of Gypsy's original adventures before breaking into new territory.


“I don’t know if climbing this bloody great hill on a hangover was such a good idea”, said Sam as she and her best friend Gypsy admired the view and puffed and panted a lot. “Especially after nearly getting washed down Aldgate Creek on the way home.  I’m stuffed!” 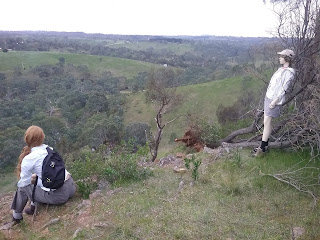 “Well”, replied Gypsy, adjusting her Ripcurl daypack . “I have a point to prove to my mother, and considering the alternatives were, like, competing in a marathon or manning the Lions Club barbecue, you should be thanking me for suggesting this little stroll!”

Sam rolled up the cuffs on her French Connection jacket and thought about that for a moment.  The scenery had indeed been amazing -  lots of big rocks (outcrops) and grey, wispy trees (Sheoaks), big furry kangaroos (Euros) and zippy lizards (Spotted Skinks).  “I think your Mum should give you a break.  After all, your boyfriend basically disappeared into thin air when you were so sure he was on the verge of proposing.  Something isn’t right there.  I wouldn’t have picked Traeger as the type to do a runner.”

Gypsy tried to raise her perfectly drawn eyebrows.  “Don’t be so sure about that.” she said.  “Remember, he sort of came out of nowhere.  And he never talked about his family or why he came to Adelaide.  Sure, I thought we had something special going on, but…well… it’s probably a blessing in disguise...hey, WATCH OUT, SAM!!” 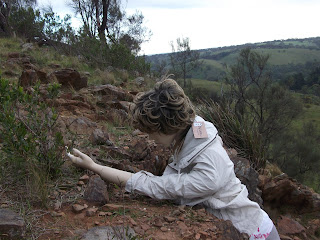 Gypsy screamed as the Sheoak branch Sam was leaning on snapped and Sam disappeared over the cliff!

Gypsy lunged toward the cliff edge.  “OMG SAM!!! Hang on!!  Grab that plant (Sticky Hopbush), and hang on tight while I use my phone to call for help!  Oh no, your tag is showing, your shoulder looks dislocated, and if you fall you will smash into a million pieces and… and…” Gypsy could barely contain her hysterical sobbing, but knew she had to keep her own limbs together if she was to remember how to actually make a phone call instead of sending a text. 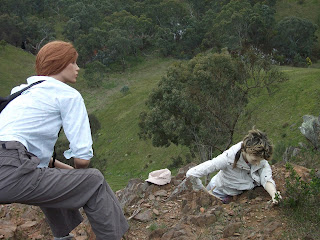 Soon after making the call she could hear a chopper in the distance.  It landed on top of the hill and out strode a dashing emergency services bloke (in NWOT King Gee workpants and Gazman shirt).
Sam was too terrified to grab the line that he threw to her.
“She’s frozen! What’s going to happen?!?!” panicked Gypsy.  “Is she going to fall?” 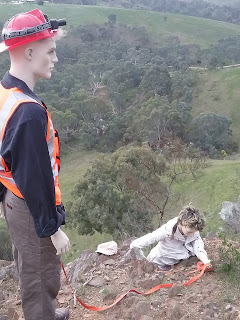 “I’ve got it covered”, said Mr King Gee.  He signalled to the chopper pilot and climbed down over the cliff edge.  Within seconds he had Sam secured tightly to his harnessed body (mmm… flashback of Eric Oldfield in Chopper Squad…) and the helicopter was lifting them back to safety at the top of the hill. 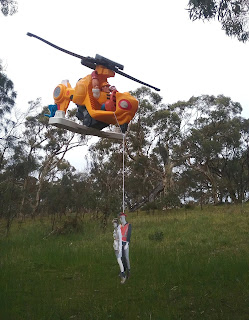 Surely a night in with a good book should be next on the cards??
Find out later…
And come down to Da Loop and see Gypsy, Sam and Mr King Gee in their outdoor gear.  In addition to those items already mentioned, Gypsy wears Kathmandu exlight shirt, Pro-lite pants and, er, Tanya’s slippers (because she has permanently pointy feet that don’t do outdoor footwear very well).  Sam wears Jendi cap, Mountain Design shorts, Helly Hansen T-shirt and Birkenstock Footprint shoes.  Mr King Gee wears own shoes, Hi-vis vest, harness and safety helmet.
A special thanks to the Milne-Bentley-Wilson film crew this week.  Always up for a challenge! 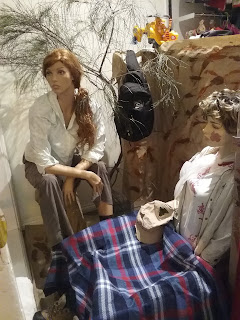 at September 24, 2019 No comments:
Email ThisBlogThis!Share to TwitterShare to FacebookShare to Pinterest

Back to the start - Gypsy's Adventures Part 2

Da Loop is taking you back to where it all began!

Over the coming weeks we'll publish all of Gypsy's original adventures before breaking into new territory.

“So you sat up drinking coffee with your mum at 2am while she bagged your pyjamas and your man, I mean ex-man, instead of sleeping??” pondered Gypsy’s bestie, Sam, while she had another crack at Gypsy’s untameable hair with the dryer. 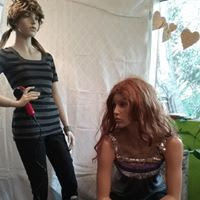 “She meant well, really she did”, Gypsy replied.  “She instructed me to go out with my friends, get some exercise, get some Vitamin D, and to reintegrate myself back into the community.

I decided it all sucked apart from the ‘go out with my friends’ bit, so here I am doing that bit first!”
The girls sipped their drinks thoughtfully, and Sam reattached her bad arm.
“At least she’s not here trying to dress us for our big night out”, Gypsy pointed out.
“Too true”, agreed Sam. 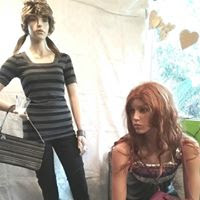 “Speaking of, what do you think of this outfit?”
“Awesome.  But I think you need a different handbag.”
“Okay.  And you need more bling.”
“Too easy.  Where would we be without each other?”

And, with that, the girls headed off to the city by taxi to the Margo & Rita nightclub, slightly dizzy from their five sauv blancs and overdose of toxic hair product.  They danced, giggled and flirted the night through, spilling  many a drink along the way much to the amusement of the barman.  Thoughts of traitor Traeger were indeed far from Gypsy’s mind. 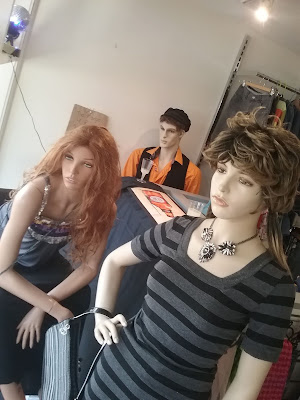 But will Gypsy feel like getting that exercise, Vitamin D, and community feel-good feeling after thirteen drinks??  Find out next week… 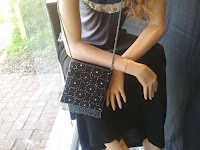 (Above - Gypsy's final choice of handbag. Below - the Margo & Rita nightclub at Da Loop as the night progressed!) 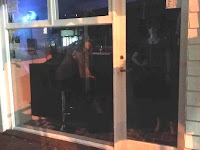