Back To The Start - Gypsy's Adventures Part 10


(Note: all Da Loop stock featured in the original adventures is no longer for sale.)

“Traeger!” Gypsy cried, lurching forward toward her ex-partner lying motionless, blindfolded, and a little warped in the armpit region on the torture machine in the centre of the dark and dusty barn. 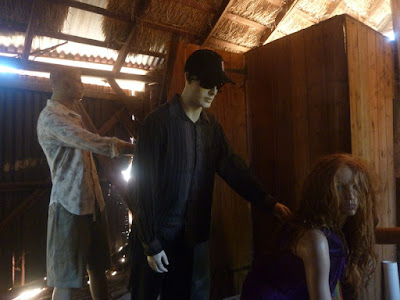 But it was too late - a figure in dark sunglasses (why?) emerged from the shadows on the opposite side of the barn and lunged at her.  Dave, looking on, recognised him as Traeger’s kidnapper.  Ron grabbed a nearby plank of wood and swung it wildly at the man’s head, knocking him out cold and flat on top of Gypsy. 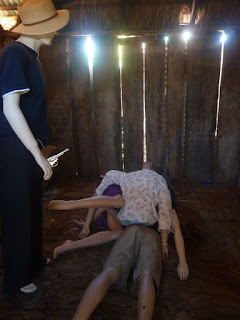 As Dave moved to pull his beloved free another door flung open and a tall man in a straw Akubra (Size 62, $20) leapt forward and swung at Ron, hitting him in the side of the head and causing him and his plank to topple forward into the tangled mess of limbs.  Akubra Man then started waving a revolver around…

… BANG!!! There was a scream followed by CRACK!!  - another shot from the doorway and then a female voice saying “I hope that one was the baddie…”  Dave turned to see a policewoman, dressed smartly in NWT Esprit dress pants and navy Converse shirt, wielding a gun.  Akubra Man slumped onto the floor clutching his knee, whereupon the policewoman cuffed him. 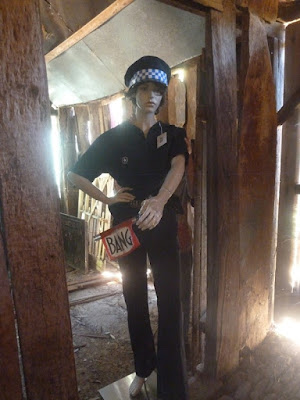 “Er, yes”, came Gypsy’s muffled voice.
“Yes what?” said the policewoman.
“Yes, that one was the baddie”.

“Gypsy!  I thought you’d been shot!!” cried Dave, wondering vaguely how she could possibly see who shot who from the bottom of a pile of bodies.
“I have, but it’s just a flesh wound.”
With immense relief, Dave turned his attention to the contraption still sitting untouched in the centre of the barn.  Traeger, still unmoving, was a sorry sight.
“Mate?” he began hesitantly. “Are you alive??”

There was a horrifying pause.  Then came the rasped response:  “Yes.  But they grilled me for fifteen minutes while those ropes got tighter and tighter.   I’m bloody sore, and I think I need a screw or two.” 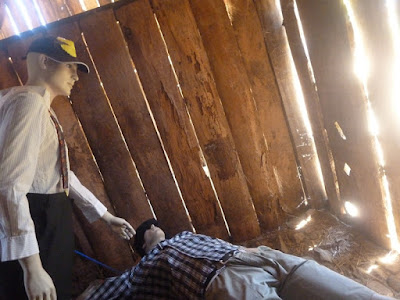 Dave decided that he’d better take that last comment the right way seeing as he was Gypsy’s boyfriend, or Traeger would soon have a few more injuries to contend with.
“An ambulance is on its way” said the policewoman.  “By the way, I’m Constable Tanner.  I was despatched by Detective Sergeant McDonald after you made the 000 call.  I’m sorry about the delay.”
“Detective?” pondered Gypsy.

“Traeger, I’m very glad you’re not dead, but you’ve been a complete tosser and as a result someone tried to drown me.  Please explain.”
The Constable shot Traeger a glance and said.  “Let’s get these two jokers out of here, send Traeger off in the ambulance and take the three of you back to the station for a nice, long cup of tea and a chat.  And I’m sure you’re all well overdue for a costume change.” 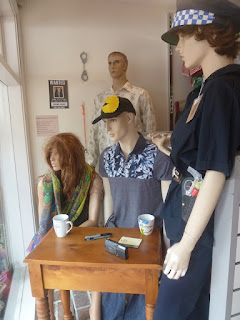 What will be revealed?  Are Traeger and Ron good guys or bad guys?  And on top of that, is Traeger really a selfish so-and-so?  And will somebody explain what the ‘blueprints’ are that have caused such anguish?
Tune in next episode!