Back To The Start - Gypsy's Adventures Part 13 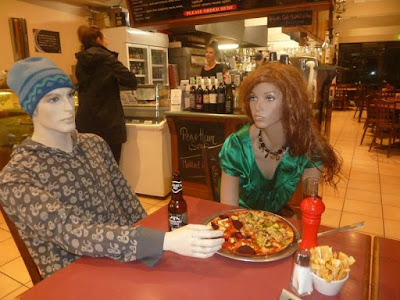 “So.. FINALLY we get to spend some time together without being interrupted by gun-wielding thugs, floodwaters or… irresponsible ex-boyfriends’, said Dave to Gypsy, rather pointedly she thought.

Gypsy, looking stunning in green Zara ($14), took a large bite of her avocado, pineapple and mushroom pizza, munched away for a bit, then replied “Well I’ve got a thing for bad boys, so I think if Traeger really was as irresponsible as you say then I wouldn’t be sitting here with you in your cute beanie, would I? I’d have followed him off to Woop-Woopland or wherever the Witness Protection Program has now taken him!”

“I was stirring you”, Dave said with a smile, but Gypsy noticed that he took a few large gulps of his Prancing Pony and nervously adjusted his beanie.

“He seemed like a nice bloke”, Dave continued, squeezing Gypsy’s arm.  “But are you saying that to hold onto you I have to go get naughty??”

“Maybe!” Gypsy grinned, then looked up and waved to Rebecca who was slaving away in the Aldgate Cafe kitchen.

“Hey! Rebecca! Feel free to join us tonight for Da Loop’s 1st Birthday party next door!  There’ll be plenty of food, bubbly and dancing if you’re up for it.” 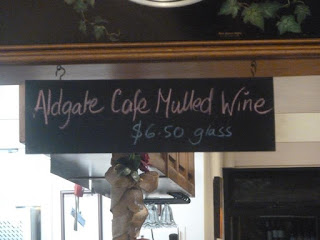 Gypsy loved the friendly atmosphere in Aldgate Cafe, and was indeed grateful to be hanging out in her hometown with the man of her dreams on this day.  That morning they’d walked some of the Valley of The Bandicoots Nature Walk, dropped in on Elvis at the Aldgate Pump Hotel and now she was sipping mulled wine contentedly and looking forward to a frolic at the Da Loop birthday celebration, and maybe a bit of Dirty Dancing with Dave back at his apartment later on… 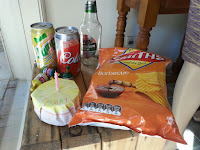 Rebecca promised to join the crew for a bubbly, then Dave finished his fourth Pony and the two lovebirds headed next door.  Amongst the party crowd were Sam (Gypsy’s bestie, dressed in pre-owned Metalicus top and skirt, $18 and $20 respectively), Ron (Traeger’s non-evil twin, casual in Kenji knit, $12), Tanya & Syb from the Da Loop Mannequin Wardrobe Department (dressed impeccably in items purchased from the best recycled clothes shop in the world), and Mel and Louise from the Da Loop Props Supply Branch. 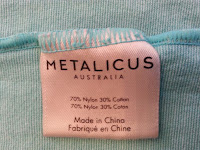 Syb was assisting Sam to hold on to her wobbly arm, while Tanya messed with the CDs, trying to make the destruction of Louise’s favourite (‘Psychedelic 70s’) look like an accident.  Gypsy became engrossed in a conversation (shouted above the music) with Ron, trying to coax information out of him regarding what would soon be his new Witness Protection Program identity.  She had no luck, but was so intently involved in the discussion that she didn’t notice Dave polishing off twelve more beers. When she finally tried to catch his attention with suggestive comments about her intended private ‘after-party party’ she was answered with a loud burb and a thud as he toppled face first onto a table, where he remained for the rest of the night, entangled in his Dungeons & Dragons Hoodie ($28).  Gypsy decided that, as easy-going as he was, he possibly didn’t handle stress very well. 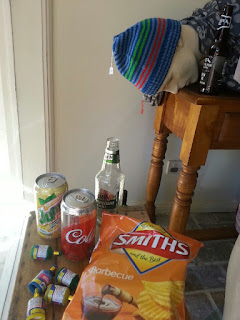 At 3am, Gypsy, Sam and Ron were still standing. (Well, actually, Gypsy was sitting.  Because that’s what she does.)  They clinked glasses in salute: Happy 1st Birthday, Da Loop, may you remain dry and in business for another year!!
Note: Sam also wears EDC jacket, $25.  Gypsy also wears Lili skirt, brown velvet and lace NWT $20, and her necklace is $12. Dave’s beanie was purchased between photo shoot and story upload so was been replaced with another $8 beanie! 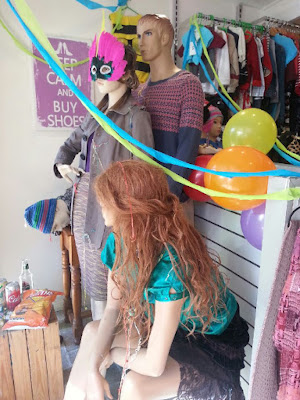