Back to the start - Gypsy's Adventures Part 5

Da Loop is taking you back to where it all began. Over the coming weeks we'll publish all of Gypsy's original adventures before breaking into new territory.

Gypsy was in the middle of a dream.  It was a very persistent dream, about a relentless waterfall.  In fact it was so persistent, and so relentless, that it was becoming quite irritating.  She awoke with a start to find that she was completely busting for the loo.  This was expected, considering her circumstances (i.e. locked in the cellar of an op shop overnight).  She jumped out of her makeshift bed and dashed to the window where, when she looked up, she could see the sun rising through the grating that led to the street above.  She opened the window while dancing about in a frenzy and hollered ‘IS ANYONE THERE???!!’, and then nearly peed her pants when a man’s voice came back from seemingly right on top of her: “SHIT! You scared the living WHATSITS out of me!!” 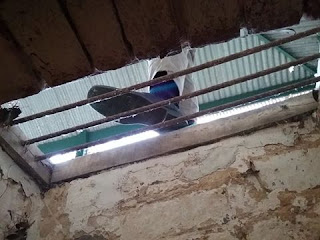 “Oh wow, sorry.”
“Where are you?! Are you a damsel in distress?”
“Um… yes? I’m stuck in this cellar.  Where did you come from?  Can you get me out? I really need to get out!”
She could now see a man’s shoe above her head.


“Hang on, I’ll just go get some tools from my car.”
The shoe disappeared. 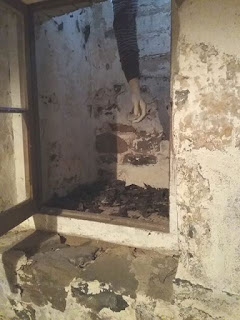 Geez, he’d better hurry! Gypsy thought as tears sprung from her eyes in response to her ballooning bladder.  She looked down and realised she was still wearing a rather loud vintage coat, so she quickly discarded it and then listened to the mystery man banging around and swearing above her head.

Finally an arm reached down into the window space.

Gypsy grabbed the arm and was hauled up into the street, where she was seated on a random piece of log.  The rescuer looked at the dishevelled redhead he’d just pulled out of the hole in the ground. 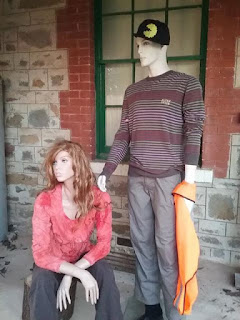 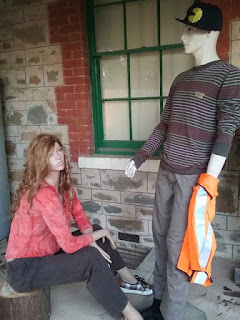 “Cripes”,  he said. “You look quite shaken and green.  Have you been trapped down there for days with no food and water??  Are you OK? Should I take you to hospital??”

“Ah… no.  I was just in there for one night.  And, um, I had a pile of clothes to play with.  Quite fun, actually.  It’s just… well… I’m so busting to wee that I’m about to vomit.  Do you know where the nearest public loo is?  I don’t know this part of town very well.”
The rescuer thought about this.  “Look, the closest loo is at my place.  Here’s my key.  The address is 6 Maple.”  He pointed.  “It’s three streets that way.  I’ve got to stay here for a meeting right now.  But in about an hour I’m free and I’ll make you a coffee if you want to wait for me.”
Gypsy attempted to raise her eyebrows.
“I’m not a murderer” he added.
Concerned look.  Then Gypsy asked “What sort of a meeting are you going to in a PAC-MAN cap?”  (She also made a mental note that he was wearing King Gee workpants, a seemingly necessary element of attire for rescuers in her home-town.)
He quickly pulled the cap off.  “Whoops!  You interrupted my morning routine.” Pause.  “…which”, he continued upon seeing Gypsy’s expression  “ah, involves wearing my PAC-MAN cap until I get to work.  I’m meeting a developer and a Council rep just over there at that intersection.  I’m a traffic engineer.”
Amused, Gypsy stood up and then said “OK, I gotta go!  See you soon” and jogged off down the road.
“WHAT’S YOUR NAME?” she called back over her shoulder.
“DAVE!” yelled Mr PAC-MAN.
“THANKS FOR RESCUING ME, DAVE!”
Two hours later, Gypsy and Dave had polished off a coffee in the loungeroom of his modest apartment and were planning their first date.  Without totally invading his privacy, Gypsy had snooped a little to check the place out before Dave arrived – it was a nice, normal man’s pad.  There was no evidence of additional  inhabitants.  There were footy trophies in the lounge cabinet, empty beer cartons by the back door, vegemite on the bench, and not a vase or cushion in sight.  Promisingly, the toilet seat had been down and she hadn’t seen anything growing in the fridge.  OMG I just HAVE to text Sam!! she had thought at that moment, but had then remembered her handbag and phone were still locked in the Mary Jane Foundation Op Shop.  So instead she had had to withhold her excitement until later that day when she had finally reached Sam’s house and blurted out her story to much giggling and eye-rolling. 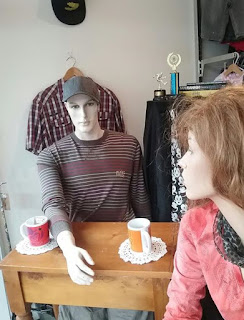 Can Gypsy put the past behind her and begin a new chapter with Dave the PAC-MAN cap wearer??

at November 02, 2019
Email ThisBlogThis!Share to TwitterShare to FacebookShare to Pinterest