Back To The Start - Gypsy's Adventures Part 6

“You must be soooo relieved that your Mum approves of Dave” puffed Sam as she broke through the pain barrier on the jogging machine, thankfully wearing her comfy Adidas running shorts purchased earlier at Da Loop.  Gypsy and Sam were sharing a few hours with the marvellous staff and machines at Fitness Life Studios Aldgate.   The original purpose was to silence Gypsy’s Mum, but the visit was proving most enjoyable in itself. 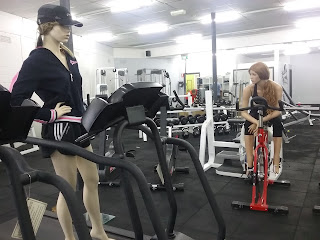 “Yes, well you know my Mum – she doesn’t stand for any nonsense.  The fact that Dave has a pronounceable name, an apartment, a job, and a family with which to eat Christmas dinner (and none of them with two heads), starts him high on the scoreboard.”
“Poor Traeger”,  responded Sam in understanding.  “He never stood a chance, did he?  He was too much the Mystery Man.  But I was still surprised when he up and left without warning.”
“Yeah, me too”, nodded Gypsy.  “That whole ‘mechanical assistant drifting from town to town” story didn’t fit him at all.  We’re talking someone who liked to book restaurants a week ahead and used the probability theory to explain why I like sunflowers.”
Gypsy adjusted her Running Bare crop top and Slazenger pants (both bargains at Da Loop) and swapped from the exercise bike to a rowing machine. 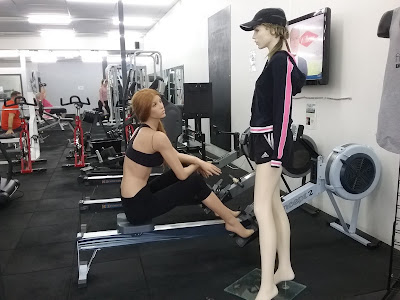 “And he pretended to shun society, but actually he constantly asked me about all my friends – what sports they played and who grew up with who and who got drunk at which party… it’s like he wanted to join in, but when it came down to it he always had an excuse for non-attendance at parties and family gatherings.  I just thought he was a bit self-absorbed, you know?  And who wants to settle down with someone who’s full of himself, or someone with some weird identity crisis, for that matter?”  She sighed, and flopped onto another piece of gym equipment.  When she couldn’t establish its purpose within five seconds, she gave up and kept talking. 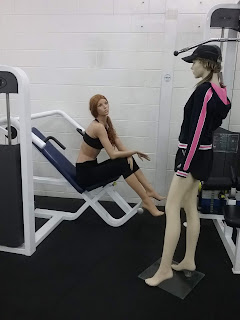 “I shouldn’t compare, but it’s so easy with Dave.  Everyone loves him, even Mum’s bloody cat, who hates everybody.  Tonight we’re going to a How To Host A Murder party with some people he randomly met while queuing at the pancake van at the local footy one day – can you believe it??  Ha ha – he’s going to look so hot dressed in the 1920s gangster outfit that the invitation instructed!  He’s wearing braces on his trousers and under that I’m making him wear…”
Sam gave her a sideways glance and cut her off.  “Yeah, yeah, spare the detail and the drool.  You gave me enough hints last week to answer any questions I might have about his sexual prowess.  I don’t need a visual.  Come on, I’ve had enough of getting fit, let’s go down to Da Loop and see if there’s any work going.  It’s been pretty bloody inconvenient having no income through all this flooding.  I know you’ve been occupied with dinner dates and movies and all that cutesy stuff, but I’ve been bored out of my brain.”
The girls got changed and headed to Da Loop.  Sam was interrupted by a phone call from Janet, her mum, asking that she pick up a parcel from the post office before five, so she waved Gypsy goodbye and they parted.
Gypsy wasn’t surprised to find the shop door open and a foot of water lapping at her feet, even though Aldgate had only seen a brief downpour.  For Chrissake!  She thought.  This workplace is soooo dysfunctional! 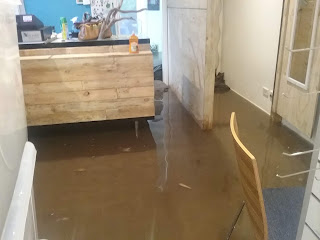 Suddenly a figure moved toward her from behind the door and she felt something cold press against her temple. 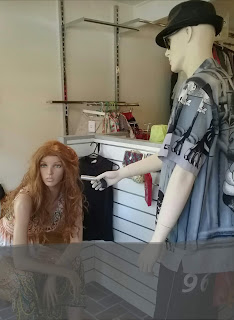 “SIT!!” said a gravelly voice.  She sat.  She felt the water rise past her knees and start lapping at her waist.

“WHERE are the BLUEPRINTS?” the voice continued.
“Um… what?” asked Gypsy.
“The BLUEPRINTS that ANDREW showed you!  WHERE ARE THEY?”
“Andrew who??  Sorry, I think you have the wrong…”
“YOU KNOW WHO I MEAN!”
“No, I…”
“TRAEGER. ANDREW. Whatever you want to call him!”
“What?!” Gypsy exclaimed, quite confused, and quite wet, as the water was now rising toward her armpits and outside the rain had started falling again.  “Are you telling me that Traeger’s real name is ANDREW?!  Christ, Mum would have a field day if she knew that!”  Gypsy stole a glance at her assailant – a tall man in a black hat, loud surf shirt, G-Star RAW jeans (all also available at Da Loop), and dark sunglasses.
“Don’t MESS with me, SISTER!!  If you aren’t going to tell me where those blueprints are, I’ll make your boyfriend bring them straight to me!  Hope you’re good at holding your breath!”
The man took out his phone and dialled.

What the f… is going on??  Why is Da Loop flooding after a seemingly normal rainfall event??  Why is there a strange man in the shop?  Why did Andrew pick such a dumb name as an alias?  What are the blueprints?  Which boyfriend is he talking about? And wouldn’t it have been more practical if Gypsy had changed into the hot pink Seafolly swim skirt instead of the Stella dress (dress $14 – bargain!)??
Tune in next time for the answers to some of these intriguing questions…


at November 25, 2019
Email ThisBlogThis!Share to TwitterShare to FacebookShare to Pinterest